Home FEATURES On This Day On This Day: 56 Years Since the Murder of Major General Johnson...
Post Views: 7 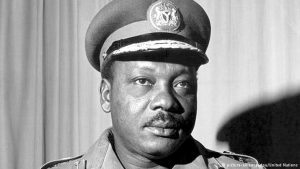 On this day in history (1966), Major General Johnson Thomas Umunnakwe Aguiyi-Ironsi, Nigerian Head of State and Lt. Colonel Francis Adekunle Fajuyi, first military governor of the former Western Region, Nigeria were murdered by a group of mutinous Northern army soldiers who revolted against the government in what was popularly called the July Counter Coup.

On 29 July, 1966, Ironsi was at the Government House, Ibadan, with his 12-year old son, Thomas, after meeting with traditional rulers from all parts of the country to explain Decree No. 34. His host, Lieutenant Colonel Adekunle Fajuyi, Military Governor of Western Nigeria, alerted him to a possible mutiny within the army. Ironsi desperately tried to contact his Army Chief of Staff, Yakubu Gowon, but he was unreachable. Having sensed something amiss, Ironsi bade his son goodbye, said, “do not take revenge.” Then he shut the guest room door.

In the early hours of the morning, the Government House, Ibadan, was surrounded by soldiers led by 27-year old Theophilus Danjuma. Danjuma arrested Ironsi and questioned him about his alleged complicity in the coup, which saw the demise of the Sardauna of Sokoto, Ahmadu Bello.

The circumstances leading to Ironsi’s death still remain a subject of much controversy in Nigeria. In an account given by Theophilus Danjuma many long years after the event, the former general would discredit fables that he gave the orders for the murder of both Ironsi and Fajuyi, that he was shoved aside by military men led by the then Adjutant, Garba Dada Paiko. This bit of history remains an unsolved mystery.

Aguiyi-Ironsi’s body and that of Fajuyi were later recovered from a pit in a nearby forest, with evidence indicating that they had been stripped, severely tortured, and shot. 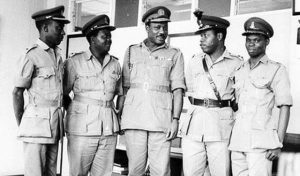 The murder of Major General Johnson Aguiyi-Ironsi (popularly referred to as “Ironside” by men of the ranks) would introduce a new order of Northern hegemony, which has sadly remained to date. Some of the key players involved in the coup have continued to rule Nigeria by proxy—either politically or economically.

In 2019, Theophilus Danjuma, who played a pivotal role in the assassination, was named as one of the richest men in Nigeria by Bloomberg, with an estimated net worth of $1.2bn.

Other northern military officers who were implicated in the counter-coup include Yakubu Gowon, who later ascended as the head of state); Murtala Muhammed (later head of state); Muhammadu Buhari, who serves as current President of Nigeria; Ibrahim Babangida (later head of state); and Sani Abacha, who ruled Nigeria with an iron fist from 1993 to 1998. Several others would later hold key ministerial and administrative positions.

Aguiyi-Ironsi has remained the shortest serving leader in Nigeria, having ruled for less than seven months. Meanwhile, despite his status as Nigeria’s First military leader, he has no national monument named after him, except for one military barracks. Aguiyi-Ironsi also does not appear on any of the country’s currencies. But his legacy remains unquestionable as he was the first captain, first major, first lieutenant colonel, first brigadier, first military attaché to a Nigerian diplomatic mission—as late General Emeka Ojukwu pointed out in his eulogy of the slain head of state.