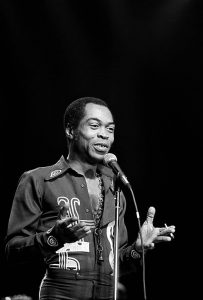 On this day in history (1997), Fela Anikulapo Kuti died at age 59. He was born Olufela Olusegun Oludotun Ransome-Kuti in 1938. He stopped using hypernated surname “Ransome” because it was a slave name.

Fela attended Abeokuta Grammar School. Later he was sent to London in 1958 to study medicine, but decided to study music instead at the Trinity College of Music. In 1963, Fela moved back to Nigeria, re-formed his band and trained as a radio producer for the Nigerian Broadcasting Corporation.

Fela’s music was popular among the Nigerian public and Africans in general. In fact, he made the decision to sing in Pidgin English so that his music could be enjoyed by individuals all over Africa, where the local languages spoken are very diverse and numerous. As popular as Fela’s music had become in Nigeria and elsewhere, it was also very unpopular with the ruling government, and raids on the Kalakuta Republic were frequent.

In 1977, Fela and the Afrika ’70 released the album Zombie.The album was a smash hit and infuriated the government, setting off a vicious attack against the Kalakuta Republic, during which one thousand soldiers attacked the commune. Fela was severely beaten, and his elderly mother was thrown from a window, causing fatal injuries. The Kalakuta Republic was burned, and Fela’s studio, instruments, and master tapes were destroyed. Fela claimed that he would have been killed had it not been for the intervention of a commanding officer as he was being beaten.

In 1978, he married 27 women, many of whom were his dancers, composers, and singers.The marriage served not only to mark the anniversary of the attack on the Kalakuta Republic but also to protect Fela and his wives from false claims from authorities that Fela was kidnapping the women.

In 1984, Muhammadu Buhari’s government, of which Kuti was a vocal opponent, jailed him on a charge of currency smuggling which Amnesty International and others denounced as politically motivated.