Home FEATURES On This Day On This Day: South African Prime Minister and Architect of Apartheid Assassinated
Post Views: 14 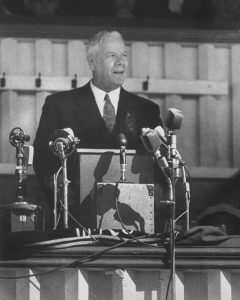 On this day: in history (1966), the South African Prime Minister and architect of apartheid Hendrik Verwoerd was stabbed to death by parliamentary messenger named Dimitri Tsafendas. Tsafendas stabbed Verwoerd in the neck and chest four times before being subdued by other members of the Assembly.

Verwoerd played a significant role in socially engineering apartheid, the country’s system of institutionalized racial segregation and white supremacy, and implementing its policies as Minister of Native Affairs and later as prime minister. He further advocated that the white minority had to be protected from the majority non-white in South Africa by pursuing a “policy of separate development” and keeping power firmly in the hands of whites, to whom he gave credit to South Africa’s economic development

These policies provoked anti-apartheid demonstrations by Black people, which were brutally crushed by government forces at Sharpeville and elsewhere. When, in April 1960, Verwoerd miraculously survived being shot twice in the head by an English farmer, he proclaimed that his survival was evidence of God’s approval of his work. During the next few years, Verwoerd’s government arrested anti-apartheid leaders such as Nelson Mandela and sentenced them to long prison terms on the basis of various convictions.

In 1994, and after apartheid had collapsed, Tsafendas was visited in prison by two Greek Orthodox priests he knew and told them that he killed Verwoerd because he was “a dictator and a tyrant who oppressed his people.” Tsafendas attempted to justify the assassination and told them:

“Every day, you see a man you know committing a very serious crime for which millions of people suffer. You cannot take him to court or report him to the police, because he is the law in the country. Would you remain silent and let him continue with his crime, or would you do something to stop him?”

Tsafendas died at the age of 81 of pneumonia in 1999, 33 years after the assassination.

The still blood-stained carpet where Verwoerd lay after his murder remained in Parliament until it was removed in 2004.