Home FEATURES On This Day On This Day: The Death of First Nigerian Published Female Playwright and...
Post Views: 15 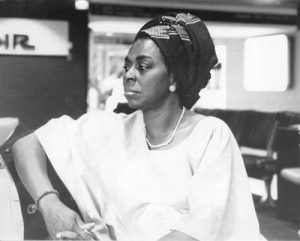 On This Day: In September 5, 1995 Zulu Sofola, the first Nigerian published female playwright and dramatist, died. She was aged 60. Sofola was also a university teacher and became the first female Professor of Theater Arts in Africa.

Born Nwazuluwa Onuekwuke Sofola, the quintessential playwright was born in the former Bendel State to Nwaugbade Okwumabua and Chief Ogana Okwumabua, both Igbo from Issele-Uku, Aniocha North Local Government Area, presently in Delta State. She attended Federal Government Primary School in Asaba and the Baptist Girls High School in Agbor, all in Delta State. Due to her outstanding performance in school, Sofola was awarded a scholarship to complete her high school education in Nashville, Tennessee, USA. With her adolescent years and early womanhood spent in the US, she studied at Southern Baptist Seminary, earned a BA in English at Virginia Union University in Richmond, Virginia in 1959, and obtained her MA in Drama (Play writing and Production) from The Catholic University of America in Washington DC in 1965. In 1966, she returned to Nigeria, and commenced her duty as a lecturer in the Department of Theatre Arts at the University of Ibadan, Oyo State, where she obtained a PhD in Theatre Arts (Tragic Theory) in 1977.

Sofola’s plays “range from historical tragedy to domestic comedy and use both traditional and modern African setting”. She uses “elements of magic, myth and ritual to examine conflicts between traditionalism and modernism in which male supremacy persists.” Considered one of the most distinguished women in Nigerian literature, she remains a source of inspiration to young African writers. Sofola’s most frequently performed plays are Wedlock of the Gods (1972) and The Sweet Trap (1977).

Other of her selected works include:

During her lifetime, Sofola received scholarly awards and distinctions both nationally and internationally. She was also a recipient of a Fulbright Scholarship. In 1989, she represented Nigeria at the first International Women Playwrights Conference.

Nwazuluwa Onuekwuke Sofola passed on the 5th of September, 1995, aged 60.