Home FEATURES On This Day On This Day: In 2012, Nigeria suspends Hajj flights over deportations
Post Views: 12 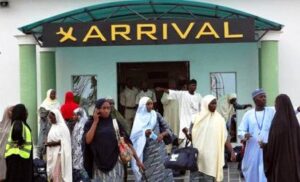 On this day: the 28 September 2012, Nigeria, through the National Hajj Commission, suspended all Hajj flights to Saudi Arabia after the authorities there initially deported more than 170 women who had arrived without a male escort. In a statement, the commission had described the situation as an “unprecedented and worrisome development”. A further 1,000 women were held in detention centres in Jeddah airport in Mecca, before they were eventually evicted from the country.

This was the first time Saudi Arabia sent back such a large group in enforcement of its stringent rules governing women. During their detention, the women reportedly slept on bare floors and were offered nothing but water in conditions that were ‘not fit for humans’. This sparked a diplomatic war between Nigeria and Saudi Arabia.

Until August 2019, under Saudi law, women needed to be accompanied by their legal guardian — which could be a father, brother, or husband — in order to travel. Saudi law maintained that women were ‘minors’ who required permission from a male relative to work, leave the country or, in some cases, receive medical treatment.

Nigerian officials responsible for organizing the hajj said that three planes were turned back from the Saudi city of Medina. According to Nigeria’s Saudi ambassador, Abubakar Shehu Bunu, it had previously been agreed that the Nigerian women could perform the pilgrimage rites as long as they were accompanied by local officials once they were in Saudi Arabia.

A Nigerian hajj official said at the time, that some of the deported women had gone with male chaperones who were supposed to lead them into Saudi Arabia. However, the official had said, the male chaperones had boarded different aircrafts to their female charges, and so were forced to disembark their aircrafts at different times. The women, who arrived in Jeddah in three groups, were detained after landing at the international airport, some reporting that they were detained in darkened planes for hours, never disembarking the aircraft before being sent back to Nigeria. Some said they’d been kept at the airport for a period of about five days under what had been described as “humiliating conditions.”

Denouncing their treatments at the hands of the Saudi authorities, some women interviewed had responded thus:

“We were held like criminals in debasing conditions. We deserve human treatment and as women and mothers, we deserve to be treated with honour but the Saudis have shown that they have no heart.”

“Many of us have cold and fever. We did not have blankets and it was cold, especially at night.”

Another woman, Maryam Abdullahi, said officials had humiliated them. “I have never been so sad in my life like in the past three days,” she said.

“We are all so sad. I used my last savings to top up what my cousin provided to pay for a hajj seat, only to be treated like infidels who are not fellow Muslims,” said Halima Muhammad, who spent two days in a detention centre

Nigeria is home to Africa’s largest Muslim population, with over 50 per cent of its 217 million strong population practicing Islam. Many Nigerians save for years to be able to perform the hajj, some receive support from wealthy Muslim philanthropists. All Muslims, those who can afford it, are required to perform the Hajj at least once in their lifetime, in accordance with the five pillars of Islam.