“He who wears the shoe, knows where it pains most”

All my life I’ve heard this but never really understood its meaning or will I say in this case never really experienced it.

I was a happy and optimistic 17 year old who happened to be enjoying life. I neither had worries or pain. That feeling of total joy that came from having nothing to bother you was what I felt then.

It wasn’t as if there were no issues, there were issues but they never really bothered me like this one.

I got admitted into the university at that age. So happy and eager I was then that I ventured into school without anything other than a set of pots, stove, a roll of sachet tomatoes and my clothes.

Nobody told me how life in the school would look like. I would have put the blame on my mum but she herself wasn’t aware of the way universities were run. I was the first child of my parents and also the first one that would be going to the university in my family.

It wasn’t easy. My parents were not twenty first century parents like most students now that would understand the difficulties that school was all about especially state universities. That money is always needed for one thing or the other. Its either we are paying for handout or school stuffs.

Anytime I asked for money, they were always complaining about how they just sent 5k last month and I was spending lavishly. Trying to explain to them every time that this was  how it worked was futile.

I joined one of the campuses fellowship and became dedicated to doing the things of God. Going for programs, winning souls for Christ, praying and interceding for students.

Life was going rosery for me when the first blow came. After payment of school fee and other registration we were asked to make, it was time for the registration of courses and everyone was asked to register.

Upon getting there, I was told my name was not on the school portal, that I had to go and complain to the ICT unit so they could rectify it.

We were in mass that was having that issue so I wasn’t really bothered. Everyone of us that had a similar problem were directed to the office for the rectification. We were told that it was dealt with and were to check in the next 10min and our names were sure to be there.

So excited I was that it was sorted out that I didn’t head to the cafe immediately to crosscheck. I called a friend that runs the cafe the news and asked him to check.

I was surprised when I received a call that it was still not reflecting. These was a week to the semester exams and it was a rule that if you didn’t register the courses, you might not be allowed to write the exams.

I panicked and went back to their office, laying complaints again and I was told along 15 other students to come back after our exams were already written. They assured us that we would be allowed to sit for the exams.

Putting these issue at the back of our minds, we wrote the exams and went back. They worked upon it again and said the same thing. As optimistic as I was then, hoping that everything would work out fine. My mistake was not telling my parents about what was happening.

I was scared my parents would demand for me to return home, especially my mom. She was one who worries and concludes matters without hearing any explanation. I knew she would worry and I didn’t want anyone to put the fear in me so I kept it from them. I went home for the first semester break with the same issue on my mind.

I couldn’t look at my parents eyeball to eyeball. Anytime they asked about my school stuff, I always lied that everything was fine and most times avoid sitting or having long chats with them to avoid any discussion that might lead to the direction of my wellbeing in school.

Second semester came and we awaited our results for the first semester. Everyone saw theirs while mine wasn’t even showing that I wrote the exams. That was when the real panic began.

I started moving from one office to another, stating my plight for the whole of that semester. Missing lectures, hours of standing in every administrative office only to be told to come back the next day, missing practicals, spending most of my money on transport and having just egg roll and soya milk to eat for the whole day.

It was exhausting but I never gave up. Kept on praying and going about my business. Second semester exams came again and I wrote. Results came out in 200 level first semester, two weeks to the exams and lo and behold, I had eight carryovers.

Words can not describe how devastating I felt. It crushed my hopes, dreams, aspirations and a lot of things. I didn’t actually believe so I checked it again. That day, I didn’t cry, I went for a program and even sang the lead for the praise and worship section.

It wasn’t until I sat in my hostel that evening that the full weight of what happened hit me. I tried remembering where I got it wrong, was it the lectures I missed – but I know a lot of students like me who didn’t even attend any lectures. If it was because I didn’t read which I knew couldn’t be the case, I read a lot.

I tried playing everything over and over in my head, trying to see where I got it wrong but couldn’t place it. Tears of pain flowed down my eyes, my heart felt like it had been shattered into numerous pieces. I never felt devastating before, like as if my heart was laced with stone. I was wearing  smiling faces during the day only to come back in the night and wouldn’t be able to sleep, I toss and toss until the rays if sun peeps through the curtains.

I informed some of my close Christian friends and was told to pray, God will do it. He will change situations and do the undoable. I prayed and fasted like my life dependent on it and still nothing changed.

I kept having sleepless nights that one day I decided to tell my parents hoping they would understand. Well, they understood but they understood what they wanted to believe not what I told them.

I started receiving endless calls from my parents, relatives. all blaming for everything, my uncle told them I didn’t sit for any exams, that I left my exams for programs and Evangelism. That three months were hectic with calls, I was being called all manner of names from uncles and aunts, even my parents from failure, to disappointment, to idiot, ungrateful human being, non chalant person.

A whole lot that I lost all manner of hope, love, self love, self esteem that I had. It was as if the light in my heart was put out, all I saw was darkness, I went into depression.

I would be  alone only for me unconsciously to start seeing images of me taking me life or running away from home. My Parents asked me to quit school and come back home, everywhere I went, I could feel pity in the eyes of people that looked at me, some was mockery, some didn’t even bother to hide it.

My mother made it worse, calling me names in the presence of my younger ones. I lost my respect, honour and happiness. On the 15th of may, I ran away from home.

And as I stand on the edge of this river, about to throw myself in its depth, I tried searching my heart to see if there was any  remorse or regret I felt. But standing here, I feel like am doing the right thing. Pain was one thing I never had the capacity for and even now, I don’t think I grew past it.

My heart can’t take it anymore and am tired of seeing disappointment on the faces of people who looked up to me. My uncle was right, maybe I was truly a failure, a failure that doesn’t deserve to be in the land of the living.

Favour Charles a Biochemistry student with a love for creativity wrote in via favourcharles00@gmail.com 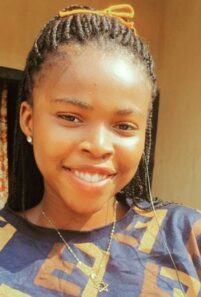