It is not uncommon, nowadays, to hear Nigerians say, “Make person just get green card like this, na so I go comot from Niger”. Or even, “This country don tire person, make God just butter my bread, make I go abroad go enjoy”. In fact, there are memes that depict how Nigerians, not neglecting new born babies who although cannot speak for themselves, lament about their national identity. A perfect example is that of a new born baby that has refused to release the doctor’s coat because the doctor has performed an operation on the mother.

Meanwhile, according to the meme, the baby had stayed back because he awaited being birthed in another country. This may sound funny, but truly, new born babies are not exempted from the difficult situation Nigeria is passing through now especially, if electricity, poor education, poverty and poor condition of living are to be considered. This, to some extent, depicts how Nigerians regret being a citizen of this country.

Moreover, gone are the days when our currency and economic sector carried value; the economic sector was favourable and things were moderately fine. Then, people loved to migrate to Nigeria to establish a business they were sure would thrive. Although, it was not as if things were not difficult, they were, but not to the extent of wanting to travel out of the country by all means. Unfortunately, presently, reverse is the case. Nigerians want to migrate to other countries, especially the United States and the United kingdom, on the basis of looking for greener pastures, good condition of living and favourable economic sector.

Furthermore, our leaders have contributed to the negative way we feel about our national identity and pride. Our leaders have decided to boast indirectly in other countries’ development by sending their children abroad to study, going for medical check-up abroad, saving and investing abroad and the worst of it all, traveling abroad to secure their lives and families when disaster looms over Nigeria. Meanwhile, the money that are being spent over the aforementioned could be use to improve our educational, economic and health sectors. Thus, making Nigeria a better place to be and discouraging citizens, especially the youths, from ridiculing the pride that should be accorded Nigeria.

In addition, considering the aspect of our cultural dress and language, one could say that very few people hold these values in high esteem. Everyone wants to dress like an English man: shirt and trousers with a matched tie or scarf or hat. Also, parents are not helping in maintaining these national pride. For instance, most Nigerian parents want their children to speak English by all means. Meanwhile, their native language that should have been prioritised are  completely neglected or are not being taught. Yes, English language is our Lingua Franca, but it is not meant to rid us off of our cultural languages. Therefore, the world may be technologically developing, it does not warrant us losing our cultural and national identities.

Despite all these, the unity among us still stands. Abraham Lincoln gracefully said, “A house divided against itself cannot stand.” Though, it may look like we are disunited, however, when trouble comes or needs be, the unity appears. An example is the recent national protest against Special Anti-Robbery Squad (SARS). The protest brought together all ethnics and religions. This undivided unity led to a worldwide protest. Fortunately, the protest was successful as SARS was eventually dissolved on 11th October, 2020. Truly, it takes only a united country to draw the attention of the world to interfere and intervene in a national situation.

Furthermore, one characteristic of a united society is the presence of religious tolerance.  Religious tolerance is the ability to appreciate spiritual values, beliefs and practices which are different from one another. It can also be related to unity in diversity. Abdu’l-Bahá, the head of the Baháʼí Faith from 1892 to 1921, explained this principle in terms of ‘oneness of humanity’. He said, “Humanity may be likened unto the vari-colored flowers of one garden. There is unity in diversity. Each sets off and enhances the other’s beauty”. The different religious values held by different ethnic groups enhances and beautify our national identity because some countries that allow only a religion still find it difficult to act as one. Which means that only an undivided nation would allow and accept different spiritual values and practices.

In conclusion, as many Nigerians wish to be given birth in another country, due to the difficulties we are going through presently, the unity we share, which although seems to be hiding in us, cannot be underrated when needs be that we speak and act as one. Thus, united we stand, divided we fall.

Abiodun Eunice Ihinrerekanmi is a student of English and Literature at the University of Ibadan. She is interested in writing short fictional stories and poems. She can be reached via euniceabiodun02@gmail.com 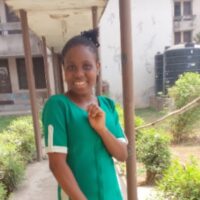