I am never surprised, especially when I say I am. This was made most decent when I lost two of my sisters, sometimes ago, within a month of each other and I wasn’t moved one bit. Everyone around me at that time expected me to grieve, mourn, shed tears, lose appetite and avoid people, but I didn’t do any of these. Of course I was saddened, but I wasn’t shocked, I simply took it in my stride.

I’m never angry. I probably exhausted all my dose of anger on a lying god. It is so bad that I usually have to remind myself to address disrespectful actions from people after much thought, and by the time I decide to react, it would be pointless. This is so bad that people who have known me for ten years now have never seen me in a fight or in an argument that is not football related.

I know this sounds like I am insensitive and uncaring, which is in fact the direct opposite of who I think I am, but then I think I may be having a problem. This problem is what has caused me talk about this single event and how shocked and angry it made me for all my adolescent and teenage years. Maybe by talking about it I can find some closure and probably heal.

Like I said, I was ten or eleven, and I lived with my uncle and his family of five at that time. I was the second oldest of the children in the house, only Mike is older. There was Kim who is two years younger than I am, and Magda, who is 6years my junior. Life was good, and I was happy up until that time, although always reminding myself that I was at their mercy.

On this fateful day, Mummy was supposed to visit her parents in Owo, and she had saved up N500 which, at that time, would have sorted her transportation to and fro and bought her parents a few tubers of Yam, for the journey. Suddenly she could not find the money, and she was supposed to leave that evening.

We were playing outside when she called in the three of us: myself, Victor, and Kemi.

Of course it wasn’t me, and it couldn’t have been Kemi, and it probably wasn’t Victor too, but who knows?

“confess now, I have written your names down…” she showed us a piece of paper on which she wrote our full names, “or I will take this names to Pastor Esupofo.”

Mummy left to Esupofo’s, and while she was away I played outside with the others.

As soon as she came back, she called me into the house and said that god had revealed to Pastor Esupofo that I was the culprit. No, thief.

I knew god was going to make a mistake.

I cannot tell you everything that happened, I can only show you the scars and tell you that I have been to hell and back.

Maybe she didn’t go to Esupofo, maybe Esupofo didn’t hear from god, maybe god wasn’t clear enough, maybe anything, but since I can’t speak ill of any servant of god, I can call god out.

That wasn’t the last time. Everything that got lost in the house was blamed on me, and I would visit hell each time, because Esupofo lied, because his god lied. It wasn’t long before I decided to earn the beating. I started doing everything bad just to annoy them. ‘e no pass beating na.’

Now I am grown, mummy has too; she stopped visiting Esupofo a while after the incident, although it didn’t change the belief that I was a thief. The church closed down, or moved to another site. I really don’t know what happened to the Pastor after that time.

Sometimes I think I have gotten over this event, but I am not sure, because each time I see mummy, I still remember, and hope she will actually apologize.

The good side to this story is that, now I have developed a kind of shock absorber. Nothing gets to me that I can’t control. Only I can inflict pain on myself. It’s either that, or I am beginning to have a problem.

One day, I will tell you everything. That day, I’ll put in the real names.

Samson Ogunmola a poet and non-fiction writer can be reached via ogunmolaologan001@gmail.com 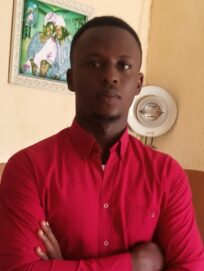