Home Essay Competition Creative Essays The Weird Side Of Love by Bismarck Faola.

Mr. Daniel, the groom, was handcuffed and dragged roughly up the aisle out of the cathedral. The congregation were in shock, and confusion was written all over their faces as such had never been heard of before. Indeed new things still happened under the sun.

Daniel was seated in his sitting room watching the television. Alice, his wife-to-be, jumped on his lap and obstructed his view.

“Alice,” Daniel said, “I am currently in the middle of a Champions League final, Chelsea versus Manchester City, can we not do this now?”

“Do what? You and your dirty mind,” she replied, “am I not better than a game where men run around to get a ball only to kick it away afterwards?”

“I am sorry, you are. But this is the finals, it only comes once a year and my club is playing presently.”

“Daniel,” she said, staring at him “you’ve started again, I promise you one day, you’ll have to choose between me and football.”

Daniel knew that tone, that latent rise in her voice. He knew what was coming next, so he picked up the remote and turned off the television.

“Yes, Your Majesty, Queen of Danieldom, what is it?” He asked, his voice reeking of sarcasm.

“You know since our university days you promised you’d give me the best life I could ever wish for, that you’d go to the ends of the Earth for me,” she said.

“Am I not doing that already? Do you now want me to walk around the globe for you?” He asked in frustration.

“Why are you talking like this?” Alice asked, “ Seems like you don’t want to get back to your match.”

“Hmm, here we go again,” Daniel murmured, “ What are we buying this time?”

“Look at this necklace baby,” she said, opening a post on her Instagram, “It just arrived at Drake and Co Stores; It’s called “The Queen of the Night”, I’d like to have it baby. Remember during the wedding of Cara and Gladys, their husbands got them the latest pieces of jewellery too. I don’t want mine to be different.”

David stared at her face in astonishment. How would he make this young lady understand that he had emptied his bank accounts to plan what could be the most lavish wedding of all time, he had even borrowed money to cater for some of her excesses. She hadn’t always been like this, he wondered where that wonderful damsel he had fallen for in the university was. She was the only woman he had ever loved.

“The starting price is 1.5 million Naira but it’s negotiable”

“1.5 what?” he screamed, “where do you want me to get that amount from? does money grow on trees?”

“Baby, my wedding will only be once, I won’t get another,” she said wriggling on his lap.

“Please wait, if it’s called the queen of the night why do you want it? Won’t our wedding be during the day?” He asked.

“Thank you, darling,” she said planting kisses all over his face “Let me check on the delicious vegetable soup I am preparing for you.”

He watched her as she walked back to the kitchen. This was going to big “NO” for him, there was no way he could raise such an amount of money within such a short period. His business would continue to weep for the next few years because of the money that he had taken for the marriage preparation.

A WEEK TO THE WEDDING (Mama Nkechi’s Pepper Soup Joint)

“Mr. Groom, why are you looking so glum,” Ojo asked, “are you getting cold feet?”

“It is Alice o, it ‘s Alice.” Daniel lamented, “That lady wants to wreck me.”

“What’s happening?” Ojo guffawed, “Is she’s no more the joy of your life?”

“Stop it Ojo,” Ade said, munching a chunk of spicy goat meat “what is it this time?”

“Thank you, oh sensible one,” Daniel said, giving Ojo a bad look “ She came to me a week ago, with this latest necklace, Queen of the moon or so. A necklace worth 1.5 million Naira! I haven’t had peace in my house ever since. Where do I want to see such a preposterous amount of money with what the economy is saying presently? Both of you know how much I have spent on this wedding preparation, with generous contributions from the both of you…”

“Generous contributions that you will pay us back” Ojo cut in.

“Ojo! Why are you so insensitive?” Ade said, raising his voice.

“Leave him, it’s his time,” Daniel said quietly, using his spoon to push around the pieces of meat on his plate.

“It’s Alice’s fault, she’s that one that wants a costly necklace from Drake’s and Co.” he added.

“What did you just say?” Ade asked, his eyeballs widening “ Drake’s and Co?”

Ade exchanged looks with Ojo before he spoke.

“We’ve been watching that place for a while now,” he said, “come closer, you’ll want to hear this.”

Ade whispered into Daniel’s ears for some minutes gesticulating widely, creating images in the air with his fingers.

“No, come on guys. You know I stopped that ages ago” Daniel said, shaking his head. “Don’t misunderstand me, I am not judging you guys, but your records are clean, mine isn’t. It would be like walking into a field filled with land mines.”

“It’s up to you bro, I am just being a friend.” Ade said, raising his hands in the air “Don’t you want to get your queen a royal necklace?”

“No, I can’t, that sacrifice is too high for me. It took every ounce of discipline in me to turn a new leaf; that boat has sailed, never to return.” With that, he took the last sip of his beer and walked out of the restaurant.

Daniel was surprised that the cathedral was filled, he didn’t realise he knew so many people. They were all smiling at him with passion, he wondered if they really wanted the best for him or they were here for the unending refreshments that would follow, after the mass.

Looking at his bride, he couldn’t have been more proud of himself; he had indeed married the most beautiful lady in existence. She had been right, the necklace looked so good on her. The glittery edges complemented the sparkles from her eyes.

The priest in charge spoke into his microphone sending echoes around the church.

“Is there anyone here who has a reason why these 2 should not be joined in holy matrimony? Speak now or forever hold your peace.”

Everyone exchanged glances, no one in their right mimd would want to impede the uniting of such a beautiful pair.

BOOM! The back doors of the church opened with a loud bang.

“We object to the wedding of these 2, Reverend Father,” a man in an expensive grey suit shouted, as he walked into the church. A wave of whispers moved smoothly through the congregation.

Seven men in black walked in behind him, the words “Nigerian Police” boldly written across their breast pockets.

When they reached the altar, one of them spoke out in a loud voice.

“Mr. Daniel Johnson, you’re under arrest for breaking and entering. Forensic results and our records show that you were present at the crime scene, Drake and Co. to be precise, during the theft that occurred about a week ago.”

“What are you talking about officer?” Daniel questioned, “ this is my wedding for goodness sake.”

“Inspector,” the man in grey said, pointing at Alice “that is one of it around her neck, one of my most expensive pieces of jewellery.”

Alice who had been dumbstruck all this while suddenly found her voice.

“You mean my necklace?” She asked, “my husband got this for me. Daniel, what is he talking about?”

“I am sorry Alice, I did it for you,” he said, tears rolling down his eyes.

“You did what for me?” She replied, almost screaming “you’re ruining my perfect day.”

Daniel looked at Ade — his best man and Ojo who was seated at the front, both of them had their heads bent. He looked at the crowd and could see surprise written all over their faces.

What had gone wrong? They had been so careful.

“Young woman,” the inspector said, “please pull off the necklace and give it to the rightful owner.”

“Danny, I didn’t tell you to go to this extent,” she said, tears welling from her eyes as she removed the necklace and handed it over.

“I didn’t say you should steal.” She said as she fell to her knees.

“I am sorry,” he said amidst sobs, as the police put his hands in cuffs and pulled him away.

“I am sorry Alice. I love you, I did it for you.” He said, his voice reverberating all through the auditorium.

Bismarck Faola is a medical student at Obafemi Awolowo University, Ile-Ife, Osun State, Nigeria. He writes as a hobby but also yearns to make a career out of it because he has so many thoughts struggling to be set free into the universe. He writes poems, essays,  articles, etc, and has taken various training and courses on writing and editing. He can be reached via faolabismarck@gmail.com 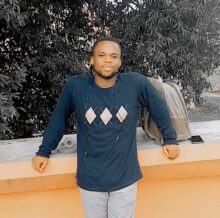