Home FEATURES On This Day On This Day: The First Train Robbery in American History
Post Views: 16 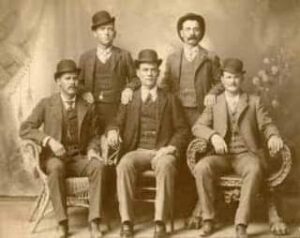 On this day: in history (1866), John and Simeon Reno popularly known as the Reno Brothers Gang, staged the first train robbery in American history, making off with $13,000 from an Ohio and Mississippi railroad train in Jackson County, Indiana.

Before the Reno Brothers robbery, previous crimes had all been burglaries of stationary trains sitting in depots. The Reno brothers’ contribution to criminal history was to stop a moving train in a sparsely populated region where they could carry out their crime without risking interference from the law. Other criminal gangs, like Butch Cassidy’s Wild Bunch, found that robbing trains was so easy and lucrative that for a time, they made it their criminal specialty.

The railroad owners, however, were not about to sit back and let Reno gang or any other bandit freely liquidate their investments. To their dismay, would-be train robbers increasingly found that the cash and precious metals on trains were well protected in massive safes watched over by heavily armed guards. As a result, by the late 19th century, train robbery was becoming an increasingly difficult and dangerous profession.

The Reno Brothers robbery gang was broken up by the lynchings of ten of its members by vigilante mobs in 1868. The murders created an international diplomatic incident with Canada and Great Britain, a general public uproar, and international newspaper coverage. No one was ever identified or prosecuted for the lynchings.

On This Day: The Exoneration of Michael Morton