Henry Ajadi was silent. The world was meant to be quiet too, well, except for the cars that crawled from one end of the road to another. The cold wind passed through the fibers of his clothes, his red tie followed the wind to his rear. His body balanced at the lintel.

He extended his legs as he took a step forward. He saw them. Different colors of cars. Maybe his neighbor might be going to work earlier today or a friend was in one of those cars coming to visit.

It doesn’t matter at the moment anyway, does it? This was not how it should have happened; I have messed up big time; I need to end it all…

Chisom was the pretty one. And Henry’s definition of pretty wasn’t just facial. A pretty girl had a great backside. Any other thing was secondary as far as he was concerned.

“Hello,” he whistled, calling the attention of the girls, “yes, you on green.”

One of them pointed to herself. Her face rolling into its center.

Chisom dropped the plate she was rinsing then said something to the other lady she was washing plates with. She rinsed her hands and unconsciously dried them at the side of her green gown.

She walked up to Henry.

“Yes, yes,” he was jolted from his thoughts.

He pulled out a chair from under the table; he wanted her to pass by so he could get a quick satisfactory scan of her backside.

“Oga, I wan stand,” she fingered her head, “if madam see me, she go send me comot. And job no dey easy to find.”

Chisom was tall and the glow of her dark skin could ring an idle phone. She was probably a 22-year-old more or less.

“I just want us to discuss one or two, you get?”

Chisom scanned Henry. Even though he wasn’t wearing a suit or so, his blue long sleeves and plain black trousers told Chisom that he was a working class at least. The Madam of the bar was coming and Chisom had to do something to waver any suspicion. She carried his dish even with the sizeable meat still remaining. Henry understood her tactics and so let her clear the table — although he felt his expensive untouched meat was going to be wasted.

He looked at Chisom as her Madam confronted her unnecessarily-long time spent with a male customer and he saw Chisom raise the plate to show her madam the content within. She was probably explaining how she tried to tell the customer not to waste his food or a lie similar to that. Henry unlocked his phone and started typing away stealing a few glances at the counter where Chisom stayed. Shortly after, he left the restaurant.

Henry had discovered IYA BERRY fast food restaurant by accident. His wife, Janet, forgot to prepare dinner before she left for church and she had texted him that she had an emergency meeting in the church and she would be coming home late. But he didn’t know that her definition of late would span to past 3pm. He couldn’t cook and couldn’t hold his hunger. Henry wanted a heavy meal, not snacks. To Mr. Henry, rice, or tea and bread were snacks — he wanted Eba with a vegetable soup crowded with meat. This prompted him to pay Utibe a visit. At least he would be served something to eat. When he got to Utibe’s place, his neighbors reported his absence. Utibe was not around this time. Without the energy to trek back home to manage any “snacks” he finds at home, he made a determined search for any place to eat around and then he found the restaurant.

He had been frequenting there over three Sundays now and in that span of time, he had got Chisom’s contact and they had started going out together. He had told Chisom that he was working with Dativaha Beverage Company, a popular brand in the country, but he never told her he managed the night shift as an assistant security officer. Worse, he never let her know that he even had a wife that was paying the bills in the house because his #18,500 salary was never enough to cater for his three children and keep the rent payment steady too.

It happened at Da’warmtouch hotel. Chisom was indeed a sweet lady, Henry couldn’t stop thinking about her and event that just occurred between them. He stole a look at Chisom, she was fast asleep from exhaustion. He double tapped the screen on his phone. 2:38am. His wife, Janet, was probably in the vigil praying violently for their financial breakthrough. It was the last Friday of the week and she had never missed any vigil as long as he can remember.

Henry’s phone rang. He was shocked by lightning from within. Could it be Janet? Was she back from the vigil? It was just an unsaved number that showed on his screen. His guilt paralyzed him. Different thoughts ran down his cerebrum.

There was a long pause. Henry was listening, patiently. His heart was on a distanceless race; he could hear it.

“What of Mide, Stanley and Ayo?”

“What?!” Chisom was jolted to full consciousness.

“Go and bring them out na—”

“In fact, I am on my way now.” He threw his phone on the table where the fancy amber lamp stood beside the bed without hanging up. “I have to rush now,” he told Chisom; her eyes asked his questions. “My kids. Fire.”

He stabbed his legs into his trousers, pierced his sleeves with his arms and rushed to the door. He knotted his red tie quickly but his belt didn’t want to comply.

“See you soon,” his eyes fixed on his belt as he left the room and headed to the receptionist.

A woman was in a hurry too, she was with a huge man with a thick head and a floating potbelly. She was about to check out until she saw Henry. His head was bent low, he was trying to get his belt clicked.

“Business trip?” The voice was familiar; Henry looked up.

“Vigil?” they were both shocked.

Non of their children survived the gas explosion. Stanley was woken at night by hunger and had wanted to prepare Indomie noodles. Neither dad nor mum was around so he had to go to the kitchen himself. He had turned on the gas but didn’t find the matches nearby and so went upstairs to get a new matchbox from mum’s wardrobe. But by the time he was back and wanted to light the matches in the gas flooded kitchen…

The Police had flooded Henry’s compound the next morning. But Henry wasn’t there. He stood by the window of the second floor of an uncompleted building a stone throw away; he was watching his wife wail over the ashes the policemen could recover. Smoke filled the area. It smelled like failure. When he met his wife at the hotel, she was rushing home and he was rushing, too. They could even attempt to blame the other. They both swam in the greasy pool of the same sin. Henry thought of his dad and late mum. He wanted to make them proud. He had promised to take his children to village to see grandpa that year.

Henry Ajadi was silent. The world was meant to be quiet too, well, except for the cars that crawled from one end of the road to another. The cold wind passed through the fibers of his clothes, his red tie followed the wind to his rear. His body balanced at the lintel. He extended his legs as he took a step forward. He saw them. Different colors of cars. Maybe his neighbor might be going to work earlier today or a friend was in one of those cars coming to visit.

It doesn’t matter at the moment anyway, does it? This was not how it should have happened; I have messed up big time; I need to end it… He tilted forward and he let go. He floated in the ocean of rushing breeze until a bricklayer down the building heard a thud. People gathered the scene. His wife was there too. Everyone she loved was gone in a single morning. Was she wrong for sleeping with Chief J.J. This was how she had been sustaining the house rent since. Had Henry known, he probably would not have wasted his money to please Chisom.

“Hail a taxi,” a man had his fingers at the base of Mr. Henry’s lifeless wrist; he stared with pity at the sobbing Janet, “His life may not be concluded yet.” 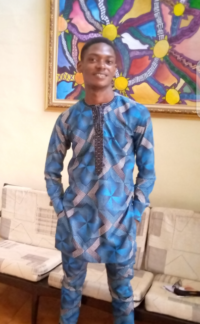