We all carry unhealed wounds. A shedload of them. But some loom above the others, haunting you like the incessant twinge of a migraine. Believing that time was an antidote, I waited for it to efface the memory. But 10 years have gone by and I haven’t healed from this incident. I’m sure the memory has culled thick dust in the memories of everyone else involved. But in my mind, it’s like a timeless artifact. Never gets old, always new. I wish I could say it’s now just a scar because a scar would mean the wound has healed and doesn’t hurt anymore. But I can’t think about that day without feeling the edacious sting all over again.

So here is what happened. Back then during our secondary school days in Ajegunle, Lagos State,  my sister, Judith and I lived with my dad’s elder sister–who we called ‘Mummy’ in the way that we Yorubas refer to elderly people even though they aren’t our real parents. If it’s an elderly man, we say ‘Daddy’– and her daughter, Aunt Peju.

Mummy decided that we should go spend the weekend with another aunt who lived in Ejigbo. So here is the thing. Aunt Peju and I returned home a day earlier than Mummy and Judith.

Now we kept our brooms behind the passage door. So when Mummy and Judith got back, she(Mummy) went to get a broom and found that the handle of one of the brooms had come undone. She asked about it, and wanted to know who did it. I said it wasn’t me. And that was the truth because I hadn’t used a broom since Aunt Peju and I returned the previous evening.

It still beats me how or when that happened. Back then, my sister’s chore was sweeping and I did the dishes. So all I can say is maybe it happened, unknowingly to her, after one of her chores when she returned the broom to the back of the door. But Judith also said she knew nothing about it.

I wish she’d stopped there. Everything would’ve been okay if she did. But she went ahead and put the blame on me. Her alibi was that I came home before her, so it had to be me. She said it couldn’t be anyone else but me.  But I had not touched a broom since I got back from Ejigbo and I tried to explain that. But Judith contended the matter in such a way that anyone would have thought she witnessed me in the act. That was what hurt me.

Mummy and Aunt Peju naturally went with my sister’s reasoning. So it felt like everyone turned against me. I started weeping. The more I defended myself, the more guilty I seemed to become. And I ruined everything when I started crying. Because according to them, my crying confirmed my guilt.

Days after that incident, I wasn’t myself. Even when I started crying, my sister still didn’t stop. As if playing on my weakness, she seemed to intensify the accusation. Her pococurante towards how I felt was something else. Sisters aren’t supposed to hurt you like that.

Sometimes I wonder if I’m just being puerile. Because it’s just a broom, isn’t it? But I got out of it wounded. Maybe it’s because my heart is made of a different material. That’s how I like to portray it. Situations affect me deeply. Perhaps too deeply. So when others have moved on and forgotten anything even happened, I seem to relive that moment over and over again in my head, as if I’m stuck in a time loop. And the fact that I can’t rewind and change it frustrates me even more.

I never mentioned the incident after that day. This is the first time I’d be saying it to anyone. I never said anything to her, not even now that we are older. It’s been so long ago and it was just a broom so why say anything.

I’ll never know how that broom came undone or who did it. But I know I was hurt beyond words. And it has stayed with me till now.

Lene Juliana is a Health Education graduate of Adekunle Ajasin University, Akungba-Akoko, Ondo State. She is naturally quiet person so writing is a regular hobby to release her emotions.  She can be reached through leneheejules@gmail.com. 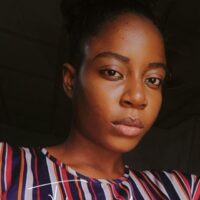