Home FEATURES On This Day On This Day: History of the Black Lives Matter Movement
Post Views: 19

On this day in history (2013), the hashtag #blacklivesmatter first appeared, sparking a movement. 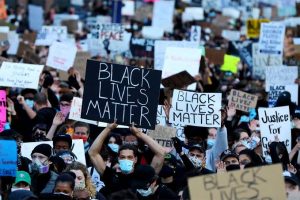 Outraged and saddened after the acquittal of George Zimmerman, the Florida man who killed a Black teenager in 2012, California resident Alicia Garza posted a message on Facebook on July 13, 2013. Her post contained the phrase “Black lives matter,” which soon became a rallying cry and a movement throughout the United States and around the world.

Garza said she felt “a deep sense of grief” after Zimmerman was acquitted. She was further saddened to note that many people appeared to blame the victim, Trayvon Martin, and not the “disease” of racism. Patrice Cullors, a Los Angeles community organizer and friend of Garza, read her post and replied with the first instance of #blacklivesmatter .

As the hashtag became popular on Facebook and Twitter, Garza, Cullors and fellow activist Opal Tometi built a network of community organizers and racial justice activists using the name Black Lives Matter. The phrase and the hashtag were then quickly adopted by grassroots activists and protests all across the country, particularly after the subsequent killings of Michael Brown, Eric Garner and a number of other African Americans at the hands of police officers or would-be vigilantes like Zimmerman.

Simple and clear in its demand for Black dignity, the phrase became one of the major symbols of the protests that erupted after Brown’s killing in Ferguson, Missouri in 2014. While polling showed that a majority of Americans disapproved of the Black Lives Matter movement when it first began, in the years following, support for its central arguments grew.

After the May 2020 death of George Floyd in Minneapolis unleashed a nationwide protest movement against police brutality and racism, support for the Black Lives Matter movement increased by a 28-point margin in two weeks,almost as much as it had in the preceding two years, according to the New York Times.