The key element of social control is the strategy of distraction that is to divert public attention from important issues and changes decided by political and economic elites, through the technique of flood or flooding continuous distractions and insignificant information ~ Noam Chomsky

Why are we fighting over trivial issues? Dissipating enormous amount of energy on the fringe stuff and often failing to resist the frequent lure of the red herrings that should be left in the obscure trail. Why do we love grappling with these distractions and outright diversions?

On a week when one had expected the discourse to be dominated by the 10 billion naira fraud scandal exposed by Premium Times it wasn’t surprising that Nigerians found it more auspicious to rant about the silly but strategic media misrepresentation of the President’s comments about some illiterate youths who are unwilling to work. Notwithstanding the President’s mention of a planned investment of $15 billion by Shell in the same commentary, the chorus all through that week was #LazyYoots.

We followed that up with the frenzy over #DinoGate and #AgegeInvasion even as the 2018 budget had been lying with our lawmakers for over six months. Few people including the media houses queried why our Senators preferred to compete with Nollywood rather than acting on a budget that affects the entire country.

And all through last week we gleefully gyrated over a video clip of the IGP struggling to read a speech in Kano even as a meticulous viewing will reveal that it was doctored to exaggerate the man’s dyslexic miscue.

It was #Transmission time. 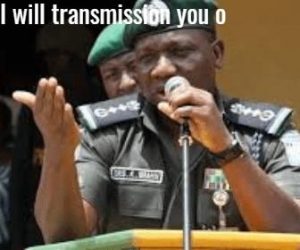 Not even the fact that little Leah Shabiru just spent her 15th birthday in Boko Haram captivity could douse our euphoria. The transmission gaffe was transmitted across the cyberspace like wildfire and received more coverage in the media than the various arrests and confiscation of weapons across the troubled middle belt by our security forces.

Is it a coincidence that while we are debating many of these mundane and peripheral things, we lose focus on the core issues in governance? Perhaps the strategy of both the APC and PDP, aided and abetted by their media cohorts?

If you don’t know that every government has a vested interest in keeping us misinformed and by extrapolation control how we think then you must be a learner. The legendary George Orwell put it thus: “Political language is designed to make lies sound truthful and murder respectable, and to give an appearance of solidity to pure wind”.

While we erroneously believe that our politicians are lethargic a lot of them understand these age-long strategies they know that in this era of digital communication characterised by animated social media platforms our interned-addled minds are soft targets for any distraction campaign. This is why many of them are unwilling to engage you on any social media debate.

It is also important to note that in Nigeria, it does not have to be coordinated by some nefarious non-state actors like in Russia or organized by government agents like in China.

Here, it only requires a little effort and sometimes unintended. Say perhaps churning out the usual sound bites from the likes of Lai Mohammed or a goof from another government appointee like the IGP and you have our cursory media running to press with the largely fickle citizens cheering, savouring and sharing.

And just like green plants are sure to wither away during the cold frosty winter these stories rarely last the week before they are overwhelmed by another. They fade into that infamous dustbin of history leaving behind only funny memes and catchy euphemisms like ‘oga at the top’, ‘lazy yoots’, ‘assurance’, ‘accolade’ and ‘transmission’ as mementos. 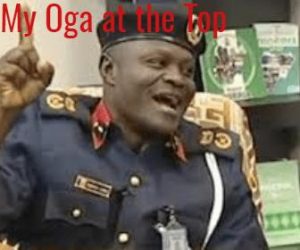 It’s a shame that most of our political reporters are attracted to the ‘‘shiny stories’’, it is like a spell. But can you really blame them? Why shouldn’t the blame go round? While media bosses demand an endless flow of material, the consumers equally want it delivered quickly else they will scroll away to some other news site. What do you get? A cacophony of mostly fake and glib stories, a perfect combination for the photosynthesis of distraction.

I remember when I started my blog and asked a Facebook friend why he hadn’t liked the page weeks after I invited him to do so. His response was somewhat apish, something you would expect from a facile mind. He said that I should leave politics and do celeb gossip if I want truly wanted to blog and attract traffic, he advised that I should emulate Linda Ikeji and co who copy and paste about anything from the grapevine without verification.

Yet another friend who is much more cerebral had told me something similar in a discussion over ‘Keeping up with the Kardashians’ and the value it adds to the society. He said that a majority of us would rather not be bothered with issues that could involve critical thinking and possibly lead to stress.

“Humanity”, he said, “is just wired like that”. He asked me to compare the number of tabloid media outfits with the broadsheet ones, the number of Kim Kardashian’s followers with that of Margaret Atwood.

“Its just the way of the world”, he concluded.

And guess what? they are both right. I often get more response when I do snippets on entertainment or lifestyle than when I post a concise and research-based essay on political issues.

That truth doesn’t make the matter less problematic though. I always believed that if you really want to separate the chaff from the wheat then you have to understand why there are eight pawns and only two officers each in a game of chess. Whatsmore, the analytical mind must learn to appropriate more time to the more important things

In any case, we can as well enjoy the fun but try as much as possible not to dwell on it. What harm could there possibly be in that? I mean it is just like eating your cake and having it, though my attempt at this has been poor I must confess.

So as the elections draw nearer we are likely to witness even more distractions, and by next February I won’t be surprised that emphasis will be on anything other than the crucial issues of governance, development and national progress. Do not fret over that, it’s just the way of the world.