Meet Izebe, born and bred in Kano. He completed his primary and secondary education in Kaduna, Jos and Kano (all Educational Less Developed States). Aside English, the only other language he speaks is Hausa. On seeking admission into a tertiary institution, the principalities and powers would have an epileptic episode if they did not assess him based on his Father’s state of origin education standard, which happens to be Edo state and which is not part of the Educational Less Developed States. So his seat mate in secondary school had a higher chance of getting admitted just by virtue of been an indigene of Kaduna State.

Welcome to Nigeria, with our very own unique and exceptionally different political system, where the settler-indigene lexicon is an essential part of our political vocabulary. Our constitution frowns at discrimination. Section 42, subsections 1 and 2 makes it very clear. But no, since Nigeria is a complex contraption, our constitution also has to be complex. They sprinkled indigeneship. So everyone born in the country is practically a citizen of the country, but not everyone given birth to in a state is truly regarded as a bonafide Nigerian in that state.

Chief Ejimchimemeonu has been in Lagos for 30 years, he pays all the multiple taxes religiously, he speaks Yoruba, some Yoruba boys even did Imu-Ahia under him. But how dare this “Omo Igbo”, he wants to be the chairman of our market! The effrontery, the unbridled temerity! Oduduwa will be huffing and puffing when he sees what is happening.

Paradoxically, Chief Ejimchimemeonu had a fit when rumours crept in that the governor of his state wanted to pick an Ijaw man over his brother as his Chief of Staff. We must aggressively defend our citizens right when we are outside our “homeland” but we must also make sure nobody comes to our homeland to exercise their citizens rights.

Since it was Eve that led Adam to sin, thereby condemning the entire human race to untold hardship, women’s suffering must always come in double-fold. Let us add marriage into the mix to make it indigene-settlers-wife trichotomy. When the woman manages to work her way to the top and gets nominated for an appointment into government,  we must come out with our stick and cutlass and remind all parties involved that she is just a wife to someone from the state, she is not one of us. If the nomination comes from her state of origin, we must say that she has been married out of the state.

Our leaders know that the settler-indigene dichotomy represents an allegory for a fragmented federation and the tragedy of a nation where differences and prejudices are accentuated. It is one of the manipulative skills in the repertoire of the elites which they use to perpetuate themselves into power. This is the reason why they repeatedly organize extraordinary meetings, make resolutions to abolish the dichotomy, after which they smile for the cameras and leave. Lest I forget, they leave behind the minutes and resolutions of the meeting at the venue and the janitors either thrash the papers or gives them to akara sellers. Rinse and repeat.

If the legislature refuse to act, do you know that the President can initiate an executive  citizens bill of rights aimed at correcting this anomaly? Such a bill will expunge section 147 of the 1999 amended constitution which encourages indigeneship and has been a lacuna too many in strengthening federalism in Nigeria. I tell you most solemnly, so far so good, it has been easier for a camel to pass through the eye of the needle than for this to be done.

Paradventure this settler-indigene dichotomy is abolished constitutionally, what next? Will it cleanse the steeped ethnicity embedded in the very fabric of many Nigerians? Will it erase the belief held by certain parts of the country that settlers are harbingers of destructive values? Will it make indigenes feel that “you are one of us”? What happens when this innate perpetual distrust Nigerians have for each other creeps in and they begin to feel some states are not upholding the true spirit of this  new law?

The complexity of Nigeria must always rear its ugly head! However, to be fair to Nigeria, being a naturalized British citizen from Nigeria only entitles you to a British passport but can never make you an English man. People all around the world always mobilize along certain identity markers like race, ethnicity, religion and social class.

Resolving this dichotomy will not be an easy feat and this dilemma will linger for a long time. Rome was not built in a day, we have to start somewhere. Let’s put an end to State of Orgin and replace it with State of Residence. Your state of residence is where you live or where you work and pay your taxes or where you school. In essence, the description of state of residence should be very fluid and flexible. This might not instantly address the major problems of the dichotomy, but it will go a long way in creating a level playing field for every citizen in every stage especially as regards to admission and scholarship opportunities, employment and political appointments. It will make Izebe have the same opportunities available to his seat mate and his other school mates. It will make anyone that resides in any state to be eligible to be nominated for ministerial positions without going against the Federal Character provision. It will make things less complicated for women by taking away that “wife controversy” and it will be a building block for further progress.

In order to go beyond just superficially making a law, severe punitive measures should be put in place to ensure strict compliance and the laws should be not be ambiguous, so as to enable easy legal interpretation.

When Nigeria’s federalism gets more matured than it currently is, we can then put the final nail in the coffin of settlers-indigenes dichotomy by making merit the first priority.

Izebe Evbogame is a final year Dental Students at the University of Benin. He believes satire is the weapon of the powerless. He writes from the confine of his house. 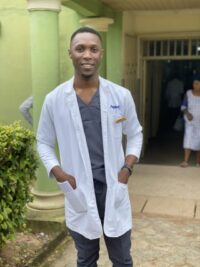