I was enormously enthralled in the weird but indulgent music of nature saturating the 1000-meter square area. My friend named John, who was closely walking behind me, could not hold his anxiety as he kept whispering to me, “this is where they laid Mr. Kogbodoku, the father of the two kids in a stone-throw from where I reside. This is Dr. Anjorin, the man who …., this is Mrs. …..” Without remorse, I had to cut him short of the hundreds of words rushing down his mouth in such a silent arena. The birds lunging here and there around the trees caught my attention. The waves of the wind blowing the plants had a relaxing effect on me. It was indeed calming, although, the place itself was not meant to be. Other than the creatures hovering around, the arena was motionless. At some time, it was as if the place was standstill. My heart suddenly started beating fast as we entered the heart of the area. The air was soaked with hostile smell of bare skeletons. In distress, all my senses communicated grief and sadness as I gazed round.

Trying to pick the direction of a soprano voice of a weeping young lady at the extreme side of the place we were, I mistakenly hit my leg on one of the kerbs which defined the path we were treading. I landed on the ground in a split second as I struggled to prevent myself from falling on a nearby grave. That was when my mind conveyed to me that we have been in a graveyard for some minutes. Although in the real sense, I knew where we were, but until now, my brain did not articulate it as I was lost in the serenity of what I was seeing.  The voice of the young lady crying became weird as different thoughts ran through my mind. The sky above me was murky and the atmosphere seemed frightening while I looked up. As I fell down, the moisture on the ground bit my body irritably and John left me battling with my mini war without offering any iota of help.

Shortly, I got back on my feet. As we kept moving, finally, we got to where late Mr. Lexi, who happens to be John’s father, was buried. Receiving a call from John the previous night and conversing that he wanted to see me, I knew something was wrong. He usually gets depressed anytime he remembers the incident that surrounded his father’s death. Being the only son of his divorced parent, it has been a tough period recently with my friend who stays alone. When my parent sent me on an errand that night, I seized the opportunity to say hello to John not knowing he would make a request I had to grant. Going with him to his dad’s grave was the greatest gift I could offer him that night.

The relationship John had with his father was an inspiring one that cannot be forgotten too soon by both parties. John stood close to his dad’s grave as if he wanted to call him forth as Jesus did to Lazarus in the Holy Bible. Sadly, he does not have such supernatural power. He was not even a religious person who had such belief. Visualizing it in his mind, John embraced the air hoping it could be his father he was hugging again. It was already 2 months since his dad’s demise and my friend had been greatly destabilized ever after.

I have never smelt the dead before until now, I only envision it in horror movies. At that moment, I was able to understand why no one wants to ‘taste’ death, unfortunately, it is inevitable. The atmosphere became intense so much that I was overwhelmed by the conglomerate of people that have kicked the bucket. I was baffled as a sporadic change in mindset started springing up in my mind. “One day, you will end up here. So, do the good you can, for the good you do, you will be remembered for,” my brain kept relaying the information to me.

After spending several minutes in the graveyard, I knew I could not have done more for my depressed friend who all he wanted was to pay tribute to his father. It was a sympathetic experience filled with tragic memories. The headstone where Mr. Lexi – John’s dad was laid sent a signal to me. This man is a hero the society will never forget, a father-figure with a pathetic wife who left him at the early days of their union. The experience at the graveyard brought to my consciousness, a deeper meaning to what life entails. While gazing at John’s dad grave, John looked straight into my eyes and said, “Life is just a cycle that everyone will have a share of. The ‘birth-to-death’ sequence will happen to all. To the outside world, birth is conceived as a lovely phenomenon and death is perceived to be horrible. This is merely a fallacy because the soul is immortal and the only thing that dies is the body housing the soul.” I nodded in agreement to what he told me. Even though Mr. Lexi’s flesh has been buried in the grave, his soul has gone to meet the great fathers. John was so sure that one day, he will meet his dad in paradise and embrace him again.

Since it was an unplanned visit to the graveyard, we were not with bouquets to lay by the headstone. Even though it was already late at night, we still spared few seconds to kneel down and offer very short prayers before we started racing back home. I had to run with my slippers in my hands. The only source of light available was the deem moon that could barely shed light on our path. Sadly, we were not with a torch or any luminous object. My parents were already waiting for me to deliver the two loaves of bread and five sachets of milk we were to eat for dinner. Now, more than ever before, the whole place was quiet so much that every step we took produced a sound that could serve as an alarm to wake the dead up. At this instant, I understood the meaning of the simile “… as silent as the grave.”

In all, the visit to the grave of John’s dad communicated to me that the memory of the deceased is still valued and treasured. To end with, we got ourselves back to the street. I was sweating profusely to the extent that my cloth was soaked massively with sweat. I went to purchase the things my parents sent me, and in addition, I bought two sachets of water. I splashed the water on my body and proposed that I will tell my parent I fell inside a culvert. Well, upon getting home, the rest was story, while the memory at the graveyard remained with me for years. 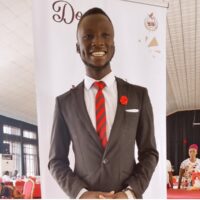