Home FEATURES On This Day On This Day: Swearing-in ceremony of the first black South African President...
Post Views: 44

On this day: in history (1994), South African Nelson Rolihlahla Mandela was sworn in as the first black president of South Africa. In his inaugural address, Mandela, who spent 27 years of his life as a political prisoner of the South African government, declared that “the time for the healing of the wounds has come.” 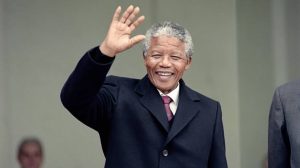 He was the country’s first black head of state and the first elected in a fully representative democratic election. His government focused on dismantling the legacy of apartheid by tackling institutionalised racism and fostering racial reconciliation.