Home Blog Should Folorunsho Alakija be a role model?

Success is where preparation and opportunity meet ~ Bobby Unser

Nigeria is an interesting country, a very interesting one at that. We are a people blessed with so much talent and so many resources yet we continue to languish in the bottom ladder of critical developmental indices.

One remarkable thing about Nigerians is the pattern of daily discourse around the socio-political issues on our various social media platforms.

Who doesn’t have a thing or two to say?

From the high to the low, we all seem to be opinionated, having an answer or a solution to every issue whether or not it is our area of knowledge let alone expertise.

And this is especially manifest on social media.

Someone said of Nigeria that while the intellectuals are running the government on social media the mediocre ones are on the ground doing same in practice.

It happened that Folorunsho Alakija who of course needs no introduction as the richest Nigerian woman or is it, African woman, (I can’t be too sure now) used her Twitter handle to share her story of ‘faith’ perhaps to encourage and inspire the young entrepreneurs out there but ended up being bashed and insulted by some of those she was trying to inspire. 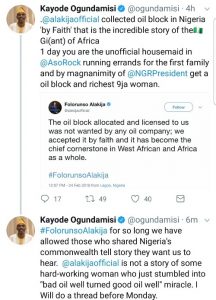 So I just decided to do a little research on the Alakija story and present a brief media report.

A cursory look at some of the obvious lies and likely truths.

She has been labelled IBB’s housemaid or errand girl. She was not. Those who know her family way back in Lagos Island attest to the fact that though she came from a large polygamous family and that her background cannot in any way be described as poor. So she was nobody’s maid or errand girl.

She was never a hairdresser as many have also erroneously tagged her, but rather from available records she started out as a secretary at Sijuade Enterprises and moved to the International Merchant Bank before she eventually left and started her Rose of Sharon Fashion House and Digital Reality Prints later.

Some have called her Maryam Babangida’s ‘tailor’. Again the truth is that much as Maryam Babangida was among her A-list clientele the lady was no roadside tailor. As a matter of fact, she studied fashion and design in the UK and already had a budding outfit in Surulere, Lagos before she met IBB’s wife.

Now having stated the foregoing it is worthy of mention that some of the narratives in her numerous interviews are likely sugar-coated in the usual manner associated with many success stories. For instance, I don’t believe she was ‘advised’ to venture into oil exploration by the then minister of petroleum Jubril Aminu after failed attempts to partner with the NNPC in other areas. Truth be told, any discerning Nigerian knows that many of our oil blocs are often held in ‘trust’ by proxies of the ruling elite who have cornered that vital resource since the end of the civil war.

It also sounds incredible that ‘nobody’ wanted the oil bloc allocated to her as she has claimed severally. I bet some of you equally had a good laugh reading that fib. I can list a million and one things we all loathe about our country but it does not in any way include an oil license because much as exploration is an expensive venture with no guarantee of success we still have foreign giants partnering with NNPC to scrape for the black gold in the arid Lake Chad region. So no matter how far or deep into the Atlantic the bloc may be there is likely to be at least one firm out there willing to give it a shot.

However, you still have to give Madam Alakija a lot of credit because oil exploration is not bread and butter. Much as she may have gotten her license through nepotism she still had to go through the tortuous process of licensing, acquisition and prospecting. And perhaps most importantly, Famfa oil smartly got capable partners in Star Deep Water Petroleum Ltd, a subsidiary of Texaco. Not a few have failed in this aspect because the government can still revoke your license for many reasons even after you might have invested millions of dollars.

You can also read a recent article in which Paddy Adenuga shared his experience about a near-hit venture that almost landed Chevron Netherlands on his lap. In that piece, he confessed his love for the oil business and stated that:

“the exploration and production (upstream) side, was the mixture of strategy, operational capability, technical know-how, politics and business acumen which all had to be married with a gambling spirit and sheer luck to be successful”

He then went ahead and detailed how ego and advice from inexperienced partners cost him a deal that would have probably surpassed his father’s exploits in the years to come.

Let’s not forget that when Madam Alakija did strike gold, her license was snatched by the almighty OBJ, it took several years of litigation processes up to the apex court to get it back. A fact which Obasanjo doesn’t deny but rather flimsily claimed to have made her a billionaire.

So Alakija’s success story did not start in the oil industry, it started from her days as a secretary and spanned through her venture into fashion, printing and oil industries. It takes some hard work to rise from a secretarial position to the head of corporate affairs department in a bank. I have an aunt that rose to a similar height in a manufacturing firm. She is now happily retired and lives on her own property in Lagos where she tends to her grandkids and flowers.

We often find it easy to sit behind a screen and cast aspersions at achievers who have been through many ups and downs to get to the top.

There is an age-old saying that if you cannot manage one kobo you definitely cannot manage one billion naira. So if her critics say she was a poor housemaid who ‘stumbled’ upon gold are they not unwittingly ascribing extraordinary managerial prowess to her? It goes without saying that an oil license is just like gold ore, it takes the onerous process of refining and molding to turn it into flashy ornaments.

Many have ‘stumbled’ upon such opportunities and wasted them while some utilized same to become tremendously wealthy. So while it makes perfect sense to criticise leaders like IBB and others who sign away our collective patrimony on dinner tables it doesn’t make much sense to troll a woman who even though ‘got lucky’ has managed to transform gold ore into a fine ornament.

Without a university degree, Mrs. Folorunsho Alakija rose from being a secretary to own a big fashion outfit, a printing firm and a JV with big oil giants like Chevron and Petrobras. She is a patron and trustee of numerous philanthropic organizations and holds the record of being the first female Chancellor of Osun State University.

I think she deserves our respect and should be encouraged to keep inspiring young ones via her story. After all how many of us will say no to an oil license?