Home FEATURES On This Day On This Day: The Shocking Death of Elvis Presley
Post Views: 35 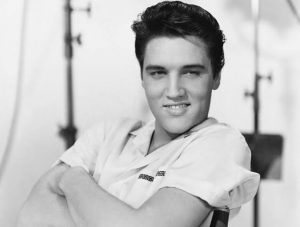 On this day: in history (1977) the popular music icon Elvis Presley died in Memphis, Tennessee. He was 42. The death of the “King of Rock and Roll” brought legions of mourning fans to Graceland, his mansion in Memphis. Doctors said he died of a heart attack, likely brought on by his addiction to prescription barbiturates.

Elvis twin brother, Jesse, died during birth. Elvis grew up dirt-poor and found work as a truck driver after high school. When he was 19, he walked into a Memphis recording studio and paid $4 to record a few songs as a present to his mother. Sam Philips, the owner of the studio, was intrigued by his voice and invited Presley back to practice with some local musicians. After Philips heard Elvis sing the rhythm-and-blues song “That’s All Right,” he agreed to release the rendition as a single on his Sun Records label. The recording went to the top of the local charts, and Presley’s career was launched.
Presley’s first RCA Victor single, “Heartbreak Hotel”, was released in January 1956 and became a number-one hit in the United States. Within a year, RCA would sell ten million Presley singles.

Having sold over 400 million records worldwide, Presley is recognized as the best-selling solo music artist of all time by Guinness World Records. Presley won three Grammy Awards, received the Grammy Lifetime Achievement Award at age 36, and has been inducted into multiple music halls of fame. He holds several records, including the most RIAA certified gold and platinum albums, the most albums charted on the Billboard 200, the most number-one albums by a solo artist on the UK Albums Chart, and the most number-one singles by any act on the UK Singles Chart. In 2018, Presley was posthumously awarded the Presidential Medal of Freedom.

In 2005, Forbes named Presley the top-earning deceased celebrity for the fifth straight year, with a gross income of $45 million. He was placed second in 2006, returned to the top spot the next two years,and ranked fourth in 2009.